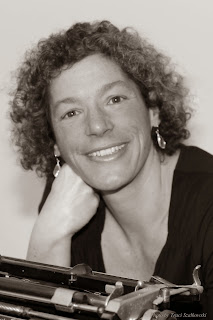 My Interview with Karen Faris.

So I happened to stumble across this amazing lady one day as I was strolling around the vast grounds of Twitter.

I was just kicking up stones and twiddling my thumbs as I mulled over my next move with Loved and Lost, when this lovely lady stopped to say hi and offered her expertise.

Anyways one thing led to another and I was given the honor to read and review her work, and I absolutely love every page turn of ‘Grumbles Take a Pill’ so I simply had to find out more about what makes this very talented lady tick.


Tell us all about Karen Faris.

There’s not much to tell. I’m a pretty ordinary woman with a family and a dog trying to forget the big city and survive living in the suburban wilderness of Upstate New York. Actually, I’m just joking. Rochester is a great place.

I’ve had a pre-internet, kind of old-fashioned writer’s life of doing many different jobs (many of them would make you cry too) while trying to carve out time to write.

I love to bake and to explore the foods of different cultures and I’m one of those people who gets excited by ideas. Also, I’m a big believer that every single child, regardless of circumstance, deserves a decent education and that everyone’s voice counts.

How do you spend your spare time? (When you're not working on amazing master pieces)

Are you sure you have the right author? Wow, thank you so much. I’m so glad you had a good time with the story.

As for my spare time, they say that when writers aren’t writing, they are thinking about writing. That’s pretty much me. I read of course and wish for more holiday time so that I can read more. I even read all the flyers and junk mail. I read what my ten year olds recommends (Out Of My Mind by Sharon Draper was one of his good picks). I read menus. Those I love to read because in my spare time I eat. Come to think of it, if I’m not thinking about writing, I’m thinking about eating. Do we get snacks? Um I may just have a bag of Jelly Tots in my bag…one moment

On a more serious note, at the moment, I’m taking an ASL (American Sign Language) class. The language is very emotive and the culture fascinating. Like learning any new language, ultimately, it teaches you about trying to communicate through language and that words are symbols. Oh, no! I feel some of my old Lit Crit classes trying to sneak into the conversation. Sh! Be very quiet. Let’s put on our cloaking device and move to the next topic.

Tell us about Grumbles

I wrote Grumbles before climate change exploded into the news. It’s intended as a comedic romp in the near future and a satire on modern existence on just about every level, political, social, environmental. It’s also filled with wordplay and silly moments, kind of like a Hitchhiker’s Guide to the Galaxy--my apologies to the wonderful Douglas Adams by even invoking his name.

How did Grumbles Take a Pill come about?

Grumbles had a long slow evolution and I was fortunate enough to have a first reader whose patience was infinite. When I started it, it wasn’t even a comedy! I’m always the last to know anything about my own work.

It began as a serious romance. It migrated to satire because I was putty in the hands of a joke. And word play? Please, Telmemydoom! I’m all over that like a dog on a couch. I just love words and layering them and giving scenes different textures and motifs from Shakespeare to fairy tales to pop culture to music and anything else that flits across my brain. The other way to look at that is I have a short attention span and like a cat, I’m always looking at the moving parts.

Another component of Grumbles evolution was that at the time, I was serving on a municipal conservation board with very bright, informed people who taught me about a lot of things I’d never even heard of, things like cyanobacteria, invasive species, how storm water management works (or doesn’t), why things do or do not get done. At times, in our everyday lives, there is just so much of the grand human comedy at play that it takes over and invades your spirit. I think that’s what happened to me when I wrote Grumbles.

Was it difficult to research a futuristic project?

You know, I never considered it a futuristic project in that sense. It grew out of issues we were discussing at our Conservation Board meetings. And the internet has made research so much easier for everything. Like later on in book three of Grumbles, Pettie is in Montreal, Canada, a wonderful city. I went to university there. But over time, I have forgotten street names etc. and now, now you just hop on-line, zoom around and look things up. I hope that never changes.

I loved how all the things we take for granted suddenly became dangerous weapons of mass destruction such as ‘Cabbage Bombs’ how did that come about? Do you have a secret Cabbage phobia?

Just the opposite in fact! I love cabbage. Kim chi, cole slaw, sauerkraut, you name it, I love it. I think I was making my own kim chi at that point in time and well, it is a stinky process.

Would you say Petite is like you in any way?

Actually I think I’m more like Q and how the world she knew disappeared. The world I grew up in, that one’s gone. Between technology and geopolitical events. Just the fact that my child is educated in a place where they have “security” and lock the doors makes me wonder what we’re teaching our children and where we’re headed.

I think where I resemble Pettie is that we both complain a lot however I prefer to say it is merely speaking out and calling attention to issues. Just talk to me for two minutes and I’m likely to get going on something. Water, the environment, politics, education. Oh that last one is a dangerous one for me because they’re “reforming” the schools here. Quick run for it while you still can!
Did you have a secret yearning to become a Secret Agent? (I know I’d like to have been oh what fun)

Yeah, I know right? Who didn’t want to be a secret agent? I think being a writer is a pretty close second.

Did you always plan to make Grumbles a series.

In fact, I did not. This is one of those lessons in how writing books and selling books aren’t the same thing. Grumbles was written as one book. The story doesn’t end until book three. When I was sending it out and it was being rejected over and over and over again, I kept hearing the same thing and that “thing” was that it was too long so I split it into three parts. And voila, after only four or five or maybe more years, here we are. The economics of the marketplace changed dramatically during the lifetime of Grumbles.

When will Grumbles 'Take Another Pill' be released?

Sometime within the next month, I believe and then Book Three, “How Many Pills Did You Take,” will be released shortly after so keep your eyes open and you can always check the website http://grumblesthenovel.com for further information or follow me on twitter either @GrumblesNovel or @karenafaris.

Is the Grumbles series your first published work?

It is. I took the scenic route to publication, it seems.

However I do have a short fiction piece up on Amazon through Kindle Direct called The Flower City Chronicles. Again, the setting is in the near future. It’s a story about a man who’s been kicked out of town. He leads a drifter’s life until he’s summoned back to town to exact a certain kind of revenge. It’s dark and brooding and a story of voice more than anything.

Darkness aside, there’s a funny story to getting this up on Amazon. I’m well-known as a dweeb when it comes to technology and navigating it. I was so concerned about the formatting and how to make the title page and all that other stuff that writers have to do when they’re self publishing a work that I somehow managed to put out the title without my name on it. It’s also under the author name K A Faris. Check it out. Tell me what you think. I have a few more stories in this flavour but just haven’t had time to put them up.

Hoooooo I will be down loading this um in about 30 seconds!


What are you currently working on?

I just finished the first draft of my next novel. I’m so excited about it—mostly because I haven’t reread it yet. That should cool my jets but until then, it’s much more of a traditional mainstream story, a high romance with characters struggling with questions of what it means to be loved and to love. In the background, are the wages of a hot, hostile world. In this world, the temperature is scorching and the winds bone dry. Tiny shards of plastic and seashell have become airborne so people have to protect themselves from essentially plastic dust storms. They’ve also been cut off from most of civilization and battling certain kinds of lawlessness. Well, that’s what I think it’s about. Can we talk again after the rewrite?

What are you currently reading and what's next on your list?

Currently I’m reading Joelle Charbonneau’s The Testing. It’s a science fiction YA novel and a good one. I’ve also just started reading Julia Suzuki’s The Land of Dragor. And a certain manuscript of one amazing writer named Allison Christie is up after that. Loved and Lost was so good! I can’t wait for people to be able to read your story.

Well what I can I say, thank you for your time Karen and for your kind words at the end there and to think it only cost me a bag of Jelly Tots