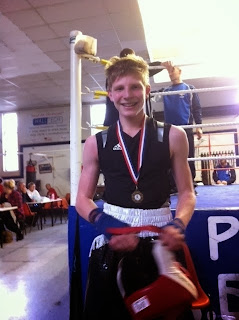 The time has come for my Son to take to the boxing ring it’s soon to be his fist fight of the new season.

You would think that after having suffered this sport for the last 4 years of his life I would have grown use to the nerves that I feel when watching my baby climb into a ring to fight another boy.

I have been asked before by other mothers how I can just sit there and watch my son fight and not jump into the ring and split it up. Believe me it’s so very hard. Every emotion possible runs through my body, tears sting my eyes but don’t fall due to cold fear, my heart beats so fast that I think I am about to have a panic attach, I shake uncontrollably as I fight to keep the rising sickness at bay. I love that boy and cant stand to watch him get hit, you have to remember that that other fighter is out to actually knock him out, his opponent would love nothing more than to see him laid on the canvas out cold.
As awful as that sounds that is the reality of the sport. Although it is horrendous I would not miss it for the world because win or lose put all of the other emotions aside and the overwhelming feeling is admiration.

The amount of hard work and dedication that a boxer puts into preparing himself to fight in its self is admirable. The children at my son’s gym train six days a week, as well as road work (jogging) and the constant weight watching.

Love it or hate it you have to respect the hard work.

I however will still be watching him through my fingers as he walks to the ring.
Posted by Unknown at Friday, November 08, 2013